As a rule, I speak publically only when forced and medicated. Last night, I was neither, but I spoke on a big stage in front of a big crowd.

I did it because I had the opportunity to support a place that brought joy and beauty to Julianna during her last year. If you have read Julianna’s Adventures, you know the place: Harper’s Playground.

A few months ago, Harper’s dad asked me to come to a fundraiser for Harper’s Playground. They want to build these places everywhere. He learned of Julianna after her death, and was moved by how much she loved the place. It motivated him, he said, to do even more.  He asked if I could talk about what it meant to Julianna.

I said yes without thinking (because thought isn’t required when something is so obviously right.) And I talked about the importance of Harper’s Playground in the only way that felt right: I told the story the way I imagine Julianna telling it.

Once upon a time, there was a girl named Julianna. Like all children, she loved to play. She needed to play. When she went to the playground, her favorite thing to do was swing.

Julianna had CMT. It made her nerves work not so well, and she had trouble walking. To fight the CMT, Julianna had to do a lot of things: treatments and therapies and “chores.” She went along with it, but it was usually boring. Julianna didn’t like boring. She just wanted to play.

When Julianna was three years old, things got serious. The CMT got stronger, and Julianna’s body got weaker. She stopped walking, and she stopped standing. She had trouble just sitting up.

Her parents were very sad. They tried to keep fighting the CMT with more therapies and treatments and chores. They thought that if they worked harder and did more chores, Julianna would get better.

It didn’t really work, and they got even sadder.

One day, Julianna’s physical therapist asked if they wanted to meet at Harper’s Playground. She told them that it was a place where everyone could play. So they came here, to Harper’s Playground. They did some therapy, but Julianna didn’t even notice. She just thought that they were playing.

It didn’t matter that she had trouble sitting up. She could still swing.

For the first time in a  really long time, they all had fun.

Julianna asked to go back, of course — again and again. Her parents gave a lot of boring adult reasons why they couldn’t. Mostly, they told her that it was just too far.

Julianna understood — kind of. The CMT was getting even stronger, and sometimes it was hard just to leave her room. But she couldn’t give up. There had to be a way. She thought and thought and thought, and she come up with the perfect idea. She shared it with her friend Christine, and they made it into a book. 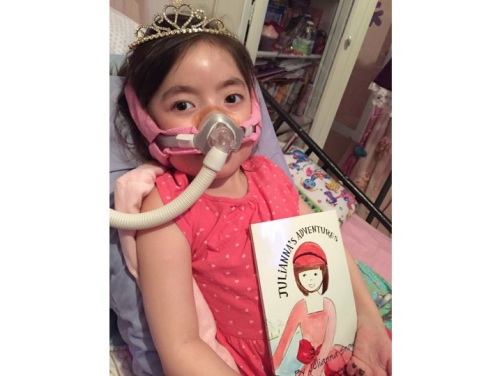 You see, Julianna had lots of great ideas. Her mom called it imagination. Julianna just thought that it was the way things should be. For example: what if it didn’t take a long car ride to get to Harper’s Playground? What if they could get there by bike?

She’d lead the way, of course. In her world, she’d have a bike that was big enough for everyone. And a trip to Harper’s Playground would take just three seconds. 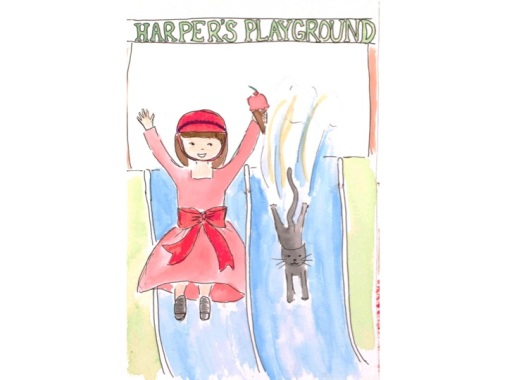 About a year after Julianna first went to Harper’s Playground, the CMT got really bad, and Julianna went to heaven. Her family was really sad again, but they were happy that she was free. They tried to remember this when all of their friends and family came to celebrate her life.

After that big party, Julianna’s family came back here, to Harper’s Playground.

They saw other families spending time together and playing. They played too, even the adults. They knew that Julianna was there too, and that she was happy to see them in the place that she loved.

After the talk, I walked over to the big saucer swing, the last swing that Julianna was able to use.  Harper’s Playground is for everyone, so I knew that I could use it too.

I sat there, and I missed her. I thought of how hard it was for Julianna here, being stuck inside a body that made it hard to play.  The familiar mix of sad and happy and hurt tears came again. I miss her so much. Harper’s Playground is such a beautiful, tangible legacy. What will Julianna’s legacy be? Her life had to mean something — I mean, I know it means something, but I wish I could see it and feel it too…

I felt the saucer swing move. I looked over my shoulder and saw a little girl. I had her by at least a hundred pounds, but she had come to give me a little push. It made me smile.

I got off the saucer swing and let the little girl on. Julianna had spoken to me again, and the message was clear: Let’s play!

P.S. A big part of Julianna’s legacy will, of course, be the fight against CMT. More to come on this soon. For now, please check out — and consider giving to — the Awkward Unicorn Walk in Portland, OR.