Today she would have been nine. But what does that even mean?

I can imagine six – she almost got there, after all. And seven isn’t so different from six. But eight, now nine, next year ten. A decade! My mind can go there, easily, but my heart doesn’t allow it. It won’t be crushed for a fantasy, not when life already contains such abundant substrate for brokenness.

An older Julianna is not an option, so I think of the past. Babies are magic, and she, with her perfectly round head and gummy smile, was no exception. 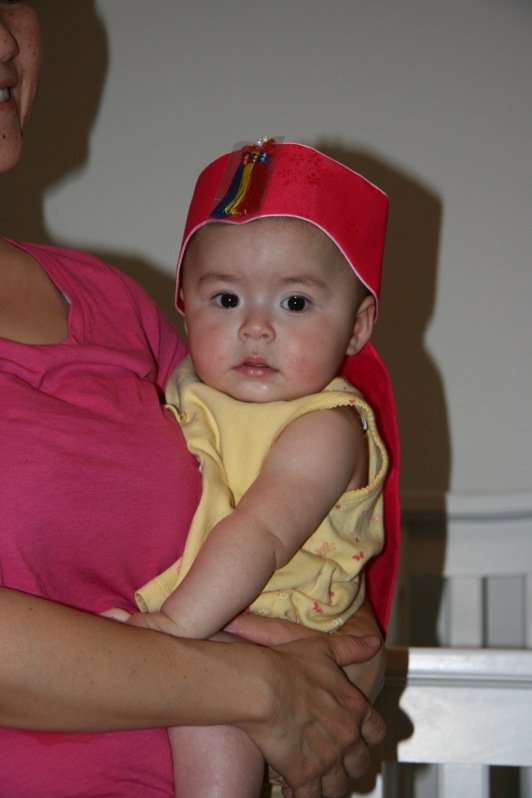 She was not an easy baby, though. My strongest memory of her first few months is crying — mostly her, but me too as I rocked and paced, rocked and paced. Why wouldn’t she stop crying? It was colic, and I couldn’t wait until it was over.

She outgrew it, but then the real problems started: worry over missed milestones, a diagnosis, determination to beat stupid CMT. Then, abject fear when we realized  we would not.

Life was a serious of obstacles. Things would be OK if we could just get past them. When she starts walking; when we get the feeding tube in; when we get out of the hospital…it will be OK.

Security based on supposition is not actually very secure at all. What if it doesn’t work out and life is most certainly not OK? You go to Plan B (then C, D, E and F) and get more desperate. If the cause is noble and you fight hard, it will work out, right? It has to work out.

This, as it turns out, is another supposition. The most earnest and pure longing of my heart, the desire to simply see her grow up, was not guaranteed. At some point, I stopped looking into the future; I couldn’t face it anymore.

Enter Julianna. If you spent any time with her at all, you knew she was special. If you managed to put away your phone and internal checklist and worry, you entered a world created by an agile mind and tremendous heart. And it changed you.

Her eyes said it all. They contained ancient wisdom and saw things that a child shouldn’t face, but reflected only peace and deepest love — and mischief.

I wish I knew what she was thinking here. Photo by Aubrey LeGault

They told me that things would be OK in the end, the real end. If I had ever doubted it before, I couldn’t now because she made it too real.

But enough of all that, they said. Life is short for all of us, so you have to play and sing and laugh.

And move, as much as you can, because you can. For the joy of it.

It really will be OK in the end, but right now, live.

So on the day she would have been nine, I’ll look for something beautiful and do something fun. The past is not accessible, not in the way I really want, and the future seems too long without her. All I have is now.

She was happiest when I stayed there with her.